I attended 5th grade at the Elkader Elementary School and 6th grade at the Volga Middle School which included grades 6 thru 8. Everyone enjoyed going to the Volga school because they had the best cooks in the entire school system and better yet you could have as much food as you wanted. Even better it was a 30-minute bus ride to the Volga school from Elkader; school didn’t start until 9 and the bus loaded at 3 to get back to Elkader.

Jerry Koons was my best friend. He was the exact opposite of me. I liked to play all sports and Jerry didn’t. He liked to go hunting and fishing, and I didn’t do either. But because of our friendship, I taught him how to play basketball and baseball. He took me squirrel hunting with him and his dad, and I spent a lot of time fishing with Jerry. We were always together.

We moved from the apartment above the grocery store to an apartment above a house toward the southern edge of town. This location was next to the Turkey River and gave me a lot of territories to explore. There was also barns and sheds on the property for me to sneak into and get into trouble later on.

We spent Christmas at my brother’s house in Cedar Rapids, and that’s where we opened our Christmas presents. It was always fun when we all got together. We played a lot of card games, and we learned a new game called “liar’s dice” which was a lot of fun. When we got back home to Elkader, I was the first one in the house, and when I went to the living room, I saw an unwrapped unexpected present for me: Before me, was the most beautiful bicycle I had ever seen. It was gold with a white banana seat with a sissy bar and high handlebars. It was a beauty. It didn’t matter there was a foot of snow on the ground, I took it out for a spin anyway.

Now that I had a reliable bike, I signed up to be a Des Moines Register paperboy. There were 4 of us delivery boys. Every so often a delivery rep would show up and urge us to get more customers. He would open his car trunk and show us all the prizes we could win if we signed up new customers. The more you signed up, the better the reward. As an enticement, the rep told us new signups get the first 2 weeks free. It was an unwritten rule that each kid would have a specific territory for their deliveries. I didn’t believe in such a practice. All I cared about was those prizes. I would canvass all over town signing up new customers. In my sales pitch, I told them about the free 2 weeks, plus I added you could cancel after that free period. That wasn’t part of the deal, but I signed up a lot of new customers. The rep was amazed at how well I did and gave me a new racing car track set. Of course, after the free 2 week period was up, everyone canceled the paper. The rep caught on what I was doing and told me not to do that anymore. I did get to keep the prize though.

In my idle time, I would lie in some tall reed-like grass close to the highway. It felt empowering to me because the grass was so high. I could see people walk by, but they couldn’t see me. It was my fort, my hideaway. I would lay on my back and watch the clouds, as they would float by as did any anxieties or worries I had. The following picture is the actual place where this happened. It is still there 50 years after I claimed it as my fort. This location played a significant part in my book.

In 5th grade, I played youth basketball. My coach’s name was Harold Bahls. He had a son David on the team. David was 1 year older than me, and his nickname was “Itchy.” Maybe my nickname, Smiley wasn’t so bad after all. I scored 8 points in my first game.

My family went on a picnic at Wapsipinicon State Park in Anamosa. Adjacent to the park was a golf course. My Dad and older brothers decided to try it out. I was too little to go with them. When they were gone, I snuck out on the golf course. I used a croquet mallet and a rubber ball and played one hole. I really enjoyed it, and golf soon became my favorite sport. I couldn’t play on a course yet, but I found a stick that curved at the end, and I would hit plastic golf balls all over the yard. I thought I needed golf shoes, so I hammered 4 nails through a pair of shoes, and I accomplished 2 things: I ruined a pair of shoes, and it hurt like hell trying to wear them.

We lived in Elkader, but my Dad joined the Backbone Golf Course in Strawberry Point. I was still too little to play, but he let me caddy for him. I thought his golf bag weighed more than it should and when I reached in the zippered compartment, I found out why. My Dad kept his tools in his golf bag.

Later my Mom bought me my first set of junior golf clubs at a rummage sale. I was mighty proud of them.

My mom got me a job working at the dairy delivering milk 3 mornings a week. I was paid 9 dollars a week. I thought I was the richest kid in town. Delivering during the winter months could be a challenge. When it was brutally cold, we would have to fill 5-gallon milk containers with hot water and place in the back of the truck to keep the milk from freezing, but that didn’t keep us from freezing.

With the money I saved working at the dairy, I bought a Honda Mini Trail 50 motorbike. I paid $135 for it, and I didn’t think I needed permission from my parents to purchase it. My thought was, it was my money, I could buy what I wanted with it. There was a dent in the gas tank, but other than that it was perfect. It had big knobby tires and had a centrifugal clutch, making it easy to shift between the 3 gears. I would have many adventures with this bike which you will hear about in the next blog installment, including the time I was chased by the police on that bike. 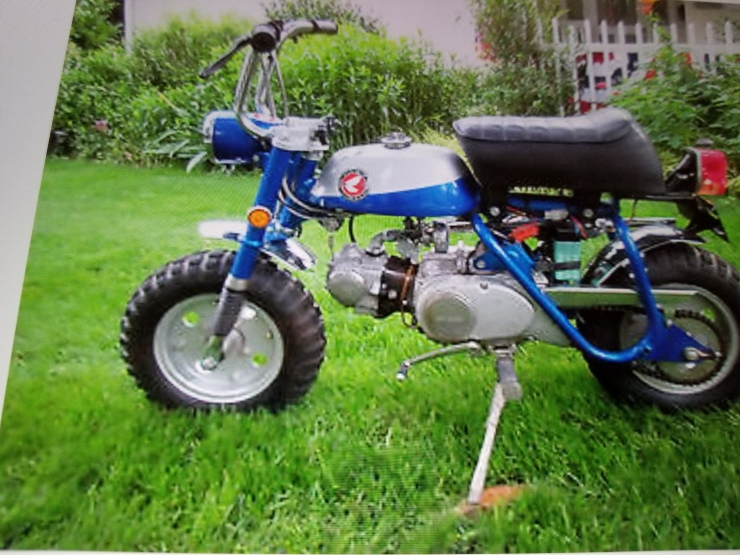